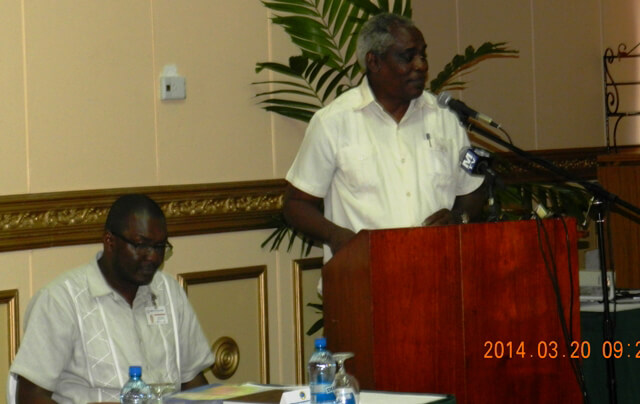 KINGSTON - Residents of communities along the Parika to Vreed-en-Hoop corridor can look forward to improved and reliable access to approximately 30.7 kilometres of roadway from Vreed-en-Hoop to Hydronie, as work will soon get underway.

This US$ 34.2M project, whose objective is to increase efficiency and safety of road transportation along the West Coast Demerara road from Vreed-en-Hoop to Hydronie, was officially launched on March 20, 2014 at the Pegasus Hotel in the presence of Minister of Public Works Robeson Benn, Coordinator, Work Services Group, Geoffrey Vaughn, Division Chief, Caribbean Development Bank (CDB), Andrew Dupigny and other stakeholders.

This Fourth Road project (West Coast Demerara Road Improvement) that is being implemented with finance from the CDB, has combined six components, each having its own estimated source of funds. The project has an estimated total financing cost of US $46.789M and the total base cost is approximately US$36.301M.

Minister Benn noted that the CDB has long been a dependable development partner to the government and people of Guyana with regards to road transport infrastructure. He said that the collaboration on the fourth road project therefore represents a new phase in this dynamic relationship.

“CDB is indeed a regional development bank which garners the resources regionally and with support from other partners, to push development infrastructure which has massive economic implication for the development of the economies in the Caribbean, and certainly Guyana would be a signal case in point with respect to the impact of infrastructure development on the economy of our country,” he said.

The CDB has been involved in road works on the Linden Highway, done under the Basic Needs Trust Fund (BNTF.) It was also involved with road improvement on the East and West Bank Demerara and in Bartica, Charity, Parika and Supenaam as well with the on-going community road improvement project. The last project funded by CDB within the Ministry of Public Works itself was the Third Road Project, which has been completed and the Profitt/Foulis Sea Defence project.

Government is particularly pleased with CDB’s continued support in the country’s infrastructure, since the Government sees infrastructure advancement as key to Guyana’s development, Minister Benn noted.

He pointed out that the infrastructure development that the government has embarked upon over the years has played a key role in all aspects of the country’s economic development. The infrastructure has assisted in synergising the movement of goods and services and people, “in having a significant multiplying effect on the task we have to do to continue to develop our country,” he said.

Minister Benn also called on his technicians, engineers and administrators to be engaged with the projects to ensure successful achievement. “I am pleased to say overall we have had significant improvements with respect to your engagement with the work…but we still have to do continuous evaluation, continuous improvement, monitoring and assessment,” he said.

In addition to the road works which also include approximately 28.5km of footpaths for pedestrians and 20km of cycle lanes, the installation of traffic signs and road markings; provision of additional street lighting; replacement of Groenveldt bridge and the repair of Uitvlugt bridge, the other components of the projects include road safety awareness which is expected to result in behavioural changes such as the adoption of safe road usage and driving practices, the CDB, Deputy Divisional Chief Dupigny explained.

The activities under this component will include a School Road Safety Education Programme, and Community and Driver Road Safety and Public Relations and Community Education. Except for the school road safety education programme which will be implemented by the Ministry of Education, the Ministry of Public Works through the WSG will have the responsibility for implementing all other programmes, Dupigny said.

The other components of the project include improvement of WSG capacity in the areas of planning and management of the primary road network and decision making on expenditure allocations for the road sector, consultancy service for the provision of engineering services for feasibility study and design and road works supervision. There are also the components of services to the project management team and another that looks at monitoring and evaluation.

Maintenance of the road will be a critical component, Dupigny said. He explained that on appraisal, one of the main operational risks that was identified by CDB staff relating to the project was the issue of maintenance. He said that in an attempt to mitigate this risk, the conditions of the loan require that Government ensure adequate preservation of the road infrastructure including the roadside drains and culverts. To this end, Government will be required to submit to CDB annual reports of the condition of the project infrastructure.

Following the launch of the road project, facilitated as well was a workshop with the stakeholders on the project aimed at building and reinforcing relationship among the various stakeholders and fostering a complete and common understanding of the project, and the roles and responsibility of the various parties.

Dupigny explained that this is because CDB is always mindful of the pace of implementation of projects. He said the workshop is one way, in which the bank is attempting to facilitate efficient implementation.

The project will complement the construction boom in the area, the erection of the New Demerara River Bridge, as well as, the increase in importation of vehicles in the country, and on the WCD.

The project is scheduled to be executed over a period of five years, and tendering is expected to start in July.