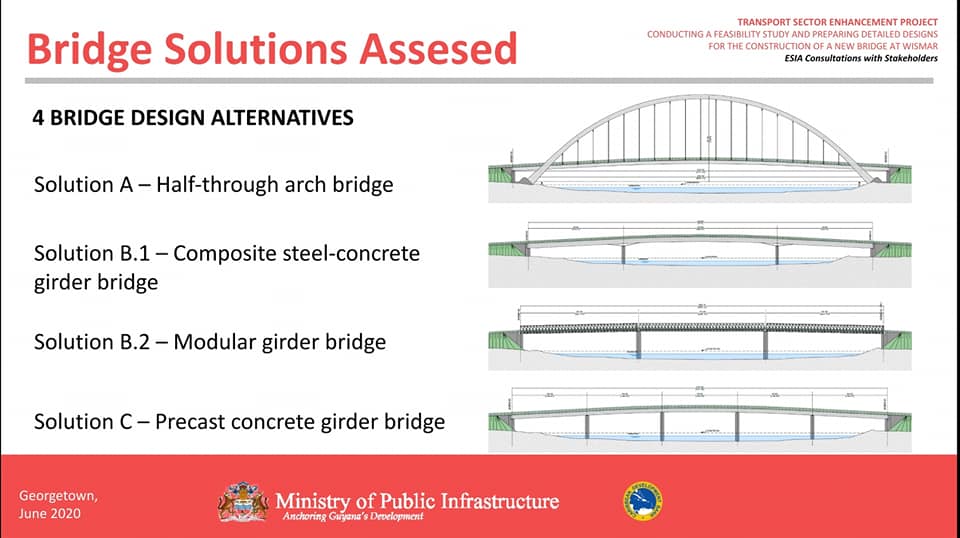 (8th June, 2020) The Ministry of Public Infrastructure on June 7, 2020 held its second Public Consultation on the Construction of a New Bridge at Wismar, Linden.

The meeting was conducted virtually on the Zoom platform due to the COVID-19 restrictions to mass public gatherings.  The virtual Consultation was moderated by Environmental Management Specialist, Mr. Marciano Glasgow who is also a key specialist on the Project
More than 100 persons joined the meeting inclusive of the Chief Works Officer at MoPI, Mr. Goeffrey Vaughn; Chief Transport Planning Officer, Mr. Patrick Thompson; Socio-Environmental Officer, Ms. Sherilyn Inniss-Alphonso; and Transport Planning Officer, Mr. Joel Flatts.
The Italian Consultancy firm, Politecnica, was represented by Team Leader, Francisco Reina, Project Director Alessio Agori and Social Specialist, Valentino Shal. The firm was contracted by the Government of Guyana in 2019 to conduct a feasibility study and prepare detailed designs for the construction of a New Bridge across the Demerara River at Linden.

The fourth option was described as the preferred bridge solution taking into account the aesthetics, socio-economic impact, technical challenges, navigation of the river, and cost among others.

The new bridge will feature two traffic lanes, shoulders, LED street lighting, pedestrian walkway, roundabouts at the two entrance points on the eastern and western sides of the river, vehicular and pedestrian underpasses, guard rails, and a toll station. The new bridge will be 210 meters in length and have a maximum vertical clearance of more than 11 meters to allow for vessels wishing to navigate the river south of the new bridge. The new bridge is being designed according to the American Association of State Highway and Transportation Officials (AASHTO) Standards. This will allow for heavy vehicles that will come from Brazil to access Guyana’s seaport on completion of the Linden to Lethem road.

The reinforced concrete bridge has been designed for a lifespan of 50 to 100 years if properly maintained.

Lindeners were keen to express their desire that the construction and operation of the new bridge will provide employment opportunities for them in the future.

However, some participants were curious about what would be done with the old bridge given its rich history. Suggestions were made for the old bridge to be used by pedestrians, pedal cyclists, and persons with disabilities. Mr. Thompson however advised that no decision has been made yet about the future use of the old bridge. One resident, Mr. Clinton Hollingsworth also suggested that multiple accesses be made to access the bridge to reduce accidents.

Questions were also raised by Lindeners with regards to the impact of this project on aquatic life as well as the effects of air and noise pollution. Mr. Glasgow pointed out that the Consultancy Team is working on an Environmental Management Plan to mitigate the harsh impacts of this project.