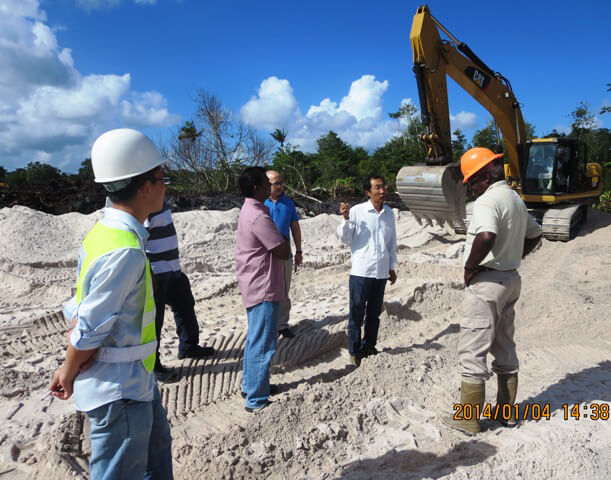 LILIENDAAL - The biggest challenge facing the US$150M Cheddi Jagan International Airport (CJIA) project stretches for 1,400 of the 2,247-ft. extension of the runway.

This is according to Assistant General Manager of the China Harbour Engineering Corporation (CHEC), Dr Zhimin Hu, who yesterday provided an update to the massive engineering confab held at the Guyana International Conference Centre (GICC).

The problem is as a result of the soft nature of the soil and the level of water present.

Dr Hu told those present at the conference, including Public Works Minister, Robeson Benn, that the company proposes to drill and install a number of sand columns meant to dry the soil and allow for greater consolidation.

The stretch of runway will also require tonnes of sand to fill it, in order to raise the level of the soil to meet the current height of the existing runway. This will have to be done along the 1,400 feet section which will be 115 metres wide and will have to be raised as much as 15 metres in some sections.

This publication understands that the existing airport was built on a plateau and as such at the end of the existing runway there is a slope downwards that will have to be raised to the level of the runway.
Dr Hu in her presentation yesterday said that one of the first challenges was finding a suitable location for the new terminal. She said that given the fact that the existing terminal was recently expanded and the fact that its extension would have disrupted services at the airport, it was decided by the Guyana Government to build a completely new terminal.

Dr Hu said that finding a suitable location that would allow for it to be integrated as well as not disturb the current operations also proved to be challenging.

In providing some background into the project, she said that the Guyana Government approached China Harbour, which prepared the project proposal as well as provided assistance for the financing through the Chinese EXIM (Export/Import) Bank.

While the contract for the project was inked in late 2011, days before former President, Bharrat Jagdeo, demitted office, work on the project did not begin until mid-last year.

Meanwhile, CJIA’s Chief Executive Officer, Ramesh Ghir, in responding to a question posed as to the ability of the extended runway to take off the load of large cargo planes, said that what is being targeted would be the Boeing 747-400. He said that Boeing 777 and 787 would also be facilitated.

Earlier this month, in providing an update of the project, Ghir had said that some 4,500 truck-loads of sand has been dumped on the site to date, and the design for the new terminal will be completed at the end of March.

Currently slated as the second largest public infrastructure project in the country, the initiative has not found favour with the Opposition, who voted down several billion dollars allocated in the budget, last year. The Opposition said they want more clarity on the project as there were not sufficient reasons advanced to justify the spending.

Government had been arguing that increased passenger traffic and a short runway have both stifled the growth of CJIA. In addition to sewage problems, the current airport in peak season is unable to handle the crowds. (Kaietuer News) 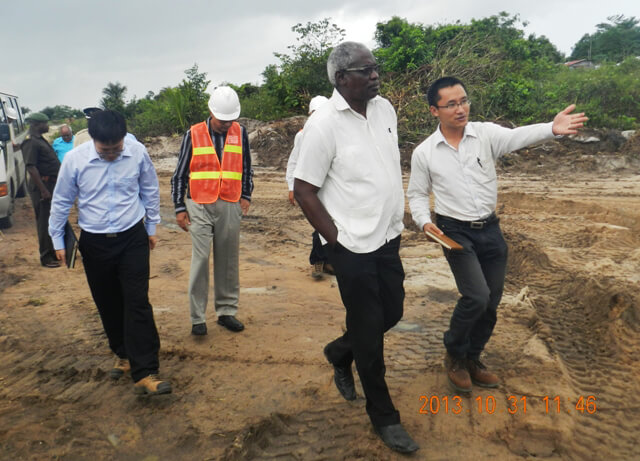 TIMEHRI  - The extension of the Cheddi Jagan International Airport (CJIA) runway has begun in earnest with the contracting firm – China Harbour Engineering Company (CHEC) - tackling a trial section in the Timehri North area [beyond the localizer].

The project commenced two weeks ago.

Minister of Public Works and Transport, Robeson Benn along with other Ministry and CJIA officials were taken on a site visit on October 31, where CHEC’s Engineers are removing the soft soil (peat) and backfilling the area with sand.

“I know we had some hiccups but I am happy to see works have commenced for this transformational project,” Minister Benn told CHEC technicians.

Meanwhile, the Minister has instructed his Engineers to carry out tests on the soil (peat) found in the area. According to him, peat is produced as an important source of fuel in certain parts of the world.

Data has shown that over time, the formation of peat is often the first step in the geological formation of other fossil fuels such as Lignite, which is considered the lowest rank of coal. It is mined in Bulgaria, Greece, Germany, Poland, Serbia, Russia, the United States, India, Australia and many other parts of Europe and it is used almost exclusively as a fuel for steam-electric power generation.

Up to 50 percent of Greece's electricity and 25.7 percent of Germany's comes from lignite power plants particularly low grade coal such as lignite

TIMEHRI - Three staffers of China Harbour Engineering Company (CHEC) - the corporation executing the Cheddi Jagan International Airport (CJIA) expansion project - were confronted by cutlass-wielding individuals who robbed one of them of a cell phone on October 12. The incident occurred around 1:45 pm.

Investigations revealed that the CHEC staff were back filling sand to the north of the existing runway when three persons approached the sand truck operator menacingly with a cutlass ordering him to stop the operation which he readily did.

The trio, alleged to be cash crop farmers in the area, left and went across to the CHEC technicians some distance off and violently stole a cell phone valued US$500 from the pocket of one of the men. Meanwhile, another employee was gripped by his neck by one of the perpetrators.

The Ministry of Public Works strongly denounces this incident which sends a wrong message to foreign nationals working for Guyana’s development.

The Timehri police are investigating the matter and two persons so far have been arrested.