TIMEHRI - Two packages of cocaine weighing 2.2 kilogrammes were discovered on a Caribbean Airlines flight destined for Toronto, Canada this afternoon, May 23, 2014 at the Cheddi Jagan International Airport.

The aircraft had arrived at 12: 11 hrs from Port of Spain, with an onward connection to Toronto.

After all baggage was offloaded from the aft hold, airline security conducted a sweep of the hold as per Standard Operating Procedure (SOP). During the sweep, the drug was discovered.

Law enforcement officers were informed, and an investigation has commenced into the matter. 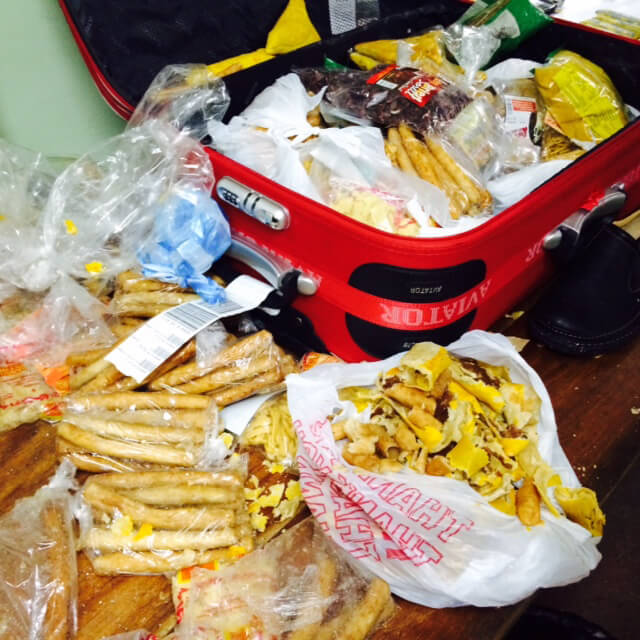 37 year-old man caught with cocaine in pastries and shoes

TIMEHRI - Nicholas Harrinandan, a Guyanese national, was caught with 7.5 kilogrammes of cocaine which was concealed in cheese rolls, pine tarts, mittai and in the soles of a pair of shoes at the Cheddi Jagan International Airport (CJIA) at around 22:45 hrs on April 6, 2014.

The 37 year-old man from Corentyne Berbice, was an outgoing passenger on BW 526 destined for J. F. K International Airport, USA when he was intercepted.

Customs and Anti Narcotics Unit (CANU) officers found the illegal substance in Harrinandan’s checked luggage. Liquefied cocaine was also found in the soles of the shoes.

This latest drug bust is the first for April. However, 11 drug mules have been arrested and charged for attempting to smuggle cocaine through CJIA for 2014. The success of these seizures is as a result of a collaborative effort with CJIA’s security, CID and CANU officers.

However, law enforcement officers continue to be confronted with the ingenious methods of traffic cocaine out of the country. These include awarra, straws, ochroes, pumpkins, cream liqueur, rum, star apples peppers, among others.

TIMEHRI - A drug mule was caught with 9.5 kilogrammes of cocaine on January 7, 2014 at the Cheddi Jagan International Airport (CJIA) due to the alertness of law enforcement officers at the country's main port of entry.

Canadian citizen Edwards Jones, a passenger on BW 606 flight, went through the screening process at Piarco International Airport, Trinidad and was in transit at the Timehri facility and awaiting the flight to his final destination – Toronto, Canada.

The illegal substance was discovered in the false walls of the 59 year-old checked luggage during a re-screening process at CJIA. The Airport X-Ray equipment was able to detect the anomaly and vigilant ranks were quick to identify the passengers and take him to Georgetown for further questioning.

In 2013, approximately 51 kilogrammes of cocaine was confiscated from mules who tried ingenious ways to smuggle the illegal substance, including ochroes and egg plants.

The success of these detections is credited to the improvements in CCTV coverage, modern security scanning equipment and additional manpower.