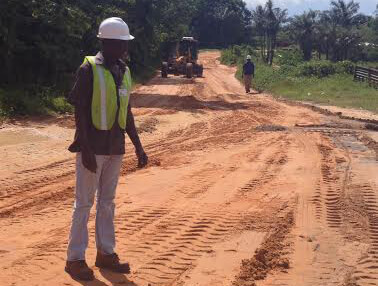 KINGSTON - The emergency work underway to fix a one mile stretch of the Bartica/Isano road, Region Seven (Cuyuni/Mazaruni) is 25 percent completed.

On Thursday July 23, 2014, Lawrence Mentis, the engineer overseeing the project; Naeem Mohamed, the Ministry’s hinterland engineer and Lloyd Rollins, Maintenance Supervisor, inspected the progress of the project which began on July 14, 2014.

According to Mr. Mentis, GY $25M approved in the Ministry’s 2014 budget is being utilized to carry out the rehabilitation works. The Force Account Unit within the Ministry is executing the project.

While the road is five miles long, the most impassable section is being fixed with part concrete/asphalt and part coal mix. The Ministry is seeking funding from Central Government to repair other sections of the heavily trafficked thoroughfare.

Nonetheless, Keith Blair Chairman of the United Minibus Union, Bartica Branch, is quite pleased with the project.

“The progress is encouraging. I speak for myself and the community and we are very happy with what is going on,” Mr. Blair said.

Under the hinterland road rehabilitation programme, the Ministry has set aside GY$1.08B to repair roads countrywide. 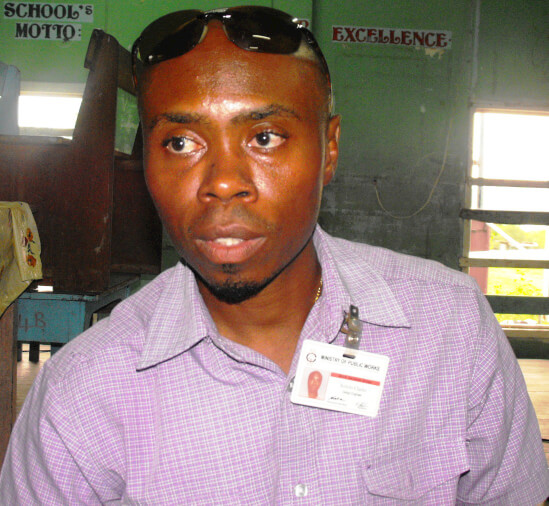 He was at the time speaking at a stakeholders’ consultation on the new East Bank Berbice Main Access Road on Wednesday. The meeting was held at the Edinburgh Primary School.

The money will come from Central Government, and will be used to maintain the road between July and October of this year when it is expected that the bigger project would come on stream. The interim contract has not yet been awarded and will not be until after a public tender is held.

Clark said that the money is intended for the maintenance of the road up to the time that the larger project would commence. However, he could not say what sections of the road would be repaired with the $60 million.

The last maintenance contract, which totalled in excess of $35 million, was for work to be done repeatedly at the Glasgow-Everton area. “Because at that time, that was the critical area; there was a lot of depressions there. We sat down with some of the residents, because it was a small budget and we wanted to know where we could have spent that money and have some impact and that was chosen, so more than likely it would be a similar [situation] where we consult with the residents and let them decide.”

During the consultation which was attended by hundreds, stakeholders gave their views on some of the issues that should be taken into consideration before designing a new East Bank Berbice Road.

After the announcement was made, stakeholders including East Bank Berbice residents, vehicle operators, the East Bank Berbice Hire Car Association and persons who have businesses along the East Bank of Berbice expressed concern over the possibility of the interim contract being awarded to H Nauth & Sons Civil Engineering Contractors.

They asked for the company to be disqualified as a bidder. H Nauth & Sons Civil Engineering Contractors had been awarded a contract to maintain the road as measures had been put in place to make the road useable, as efforts had been made to construct a new East Bank Berbice Road.

The construction company had issued a statement to the Public Works Ministry earlier this year that it was a waste of money to continue repairing and trying to maintain the road, because it was beyond repair and accepting another such contract would not do well for the image of the company. (Guyana Times)

KINGSTON - Motorists are being advised that as of Monday June 16, 2014 - East and West bound traffic on Lamaha Street will be prohibited from turning right into Albert Street.

Advance warning and junction signs have been installed and the traffic signals will be adjusted accordingly to allow for faster discharge of traffic through this intersection.

Motorists should be careful to observe the No Right Turn Symbol.

What that means is that:

Overall motorists will encounter fewer delays at this junction. 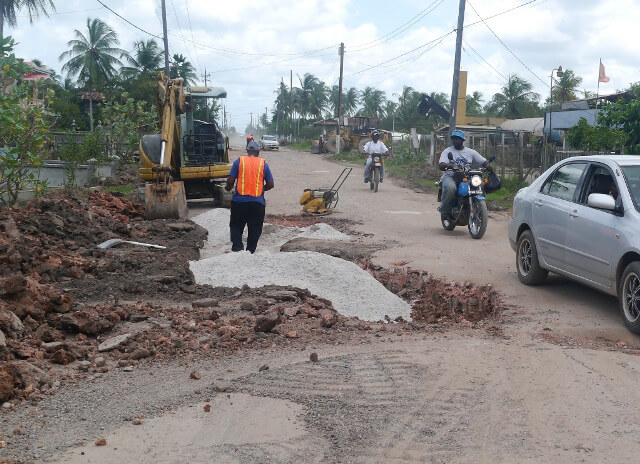 KINGSTON - The rehabilitation of the East Berbice Berbice road is expected to begin in October of this year, according to Sunil Ganesh, the Engineer overseeing the project.

According to him, works will start from Main Street, New Amsterdam to Light Town – a 16 kilometer stretch of road.

“The road design, which is being prepared by a Canadian consulting firm EXP in association with CEMCO, is expected to be completed in July, 2014,” Ganesh said.

Funding for the road will be provided through a loan from the Inter-American Development Bank (IDB) under an agreement for road network upgrade and expansion, with the Government of Guyana.

The finished product will be an asphaltic concrete thoroughfare.

In the meantime, the Force Account Unit staff and contractor’s efforts from the Public Works Ministry will continue to keep this road trafficable.

$13.7 B to be spent on roads and bridges network improvement

KINGSTON - Several key roads and bridges projects, all aimed at alleviating much of the current traffic bottlenecks across the country will be undertaken this year under a carefully thought out budgetary allocation. Out of the total $13.7 billion allocation, the sum of $12.9 billion will be spent on roads and $844.2 million on bridges.

He alluded to the fact that improved linkages with neighbouring countries, within the country’s own borders, between producers and consumers, across and within communities, all lend themselves to improved competitiveness and connectedness.

According to Minister Singh the four -lane access road to the Cheddi Jagan International Airport (CJIA) and the East Bank Demerara four-lane highway are slated for completion this year.

Further works will commence on the West Coast Demerara Road and will include pavement rehabilitation, pedestrian and cycle lanes in selected high traffic areas, and street lighting.

The Finance Minister pointed out that provisions have also been made for the widening of the East Coast Highway, and road reconstruction works for the upgrading of Better Hope to Belfield will commence.

Construction of the Parika/Ruby Backdam roads will begin, thus opening up access to over 330 farming households and over 2,000 acres of mixed crop farming.

Minister Singh also announced that engineering designs for the Canal Polder Nos. 1 and 2 roads and feasibility studies and designs for the extension of the highway from Diamond to Timehri will be undertaken.

On the East Bank Berbice, studies and designs will be completed and the complete reconstruction of  six- kilometres from Stanleytown to Everton and upgrade of 11.5 kilometres from Belle Vue to Light Town will commence.

Dr. Singh also announced that the Government will complete a financial feasibility study for the construction of a bypass road from Ogle on the East Coast to Eccles on the East Bank which will open new areas for development and investment and create a second route to reduce the congestion for the East Bank Demerara traffic.

This, the Minister said will constitute the first phase in the development of an alternative route to the CJIA thereby linking the countries two international airports and opening up a new development corridor for the East Bank Demerara.

An amount of $7.7 billion is allocated for the improvement of rural, community and hinterland roads and for street lighting from Belle Vue to Patentia on the West Bank, Demerara.

Further, Dr. Singh said negotiations have advanced substantially between the Brazilian and Guyanese technical working groups regarding the preparation of a design study for the construction of the Linden to Lethem road.

The technical assessment for alternative transport options, Dr. Singh said includes the cost benefit analysis of a rail link to ultimately connect with the deep water harbour and container port on the Berbice River.  For this particular project, Dr. Singh said the administration has collaborated with the Surinamese Government for the construction of a fixed bridge over the Corentyne River. Further, resources are budgeted to upgrade the road link from Springlands to Moleson Creek and to prepare the bridge terminal facility at the crossing.

Additionally, the feasibility study for the new Demerara Bridge has been completed, and Government has invited expressions of interest for a public-private partnership for its construction and budgeted $338 million for critical works to extend the life of the Demerara Harbour Bridge. 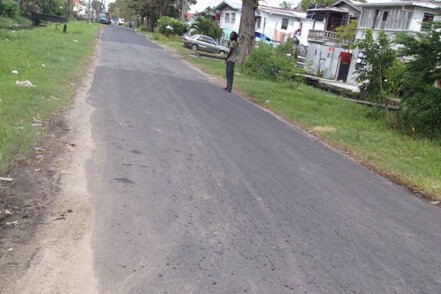 KINGSTOWN – The Ministry of Public Works continues to push out its mandate by paving roadways for the safe usage of motorists and pedestrians.

Against this backdrop, thoroughfares in and around Georgetown continue to be transformed. In fact, 3,000 feet of Princess Street between Louisa Row and Lombard Street was recently paved.

According to Lawrence Mentis, an Engineer attached to the Works Services Group (WSG) within the Ministry, the cost for the repairs stood at $9,522,000.

“We do these roads because they reduce maintenance of vehicles, increase level of service, reduce fuel consumption and increase productivity,” he added.

Over 20 roads have been earmarked to be rehabilitated.

“Minister [Robeson] Benn initiated the meeting because he was worried about the number of accidents involving mini-buses. Areas we touched on included overloading, the haphazard way the short routes drivers use to roadways and of course signage,” Vaughn stated.

More importantly, minibus operators complained that many of the signs were painted on the roads. They recommend that more sign posts be erected and pledged to make the city’s thoroughfares more driver friendly and hassle free as possible.

To this end, Minister Benn and his team will over the “next few months’ brainstorm on medium and long measures to deal with the issues raised and take them to the associations and operators for evaluation.