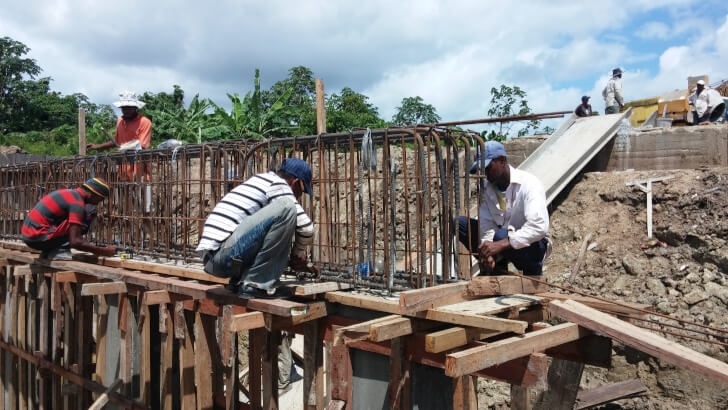 KINGSTON - The 105 feet bridge which is under construction at Moleson Creek, Region Six is estimated to be completed by August 2014 and will facilitate an easier flow of traffic, according to Sherod Parkinson – a Ministry of Public Works’ Engineer overseeing the project.

A site visit on Monday, June 23, 2014 allowed Ministry officials to see the progress of the GYD 60M concrete developmental project.

According to Parkinson, the contractor B & J Civil Works has completed casting the supporting beamsand columns, and is awaiting the importation of longitudinal beams to conclude the project.

We expect the beams to be here in another two weeks or so in Guyana. After that, the contractor just has to put the beams in place and cast the concrete deck,’ the ministry’s engineer explained.

In the meantime, vehicles and motorists can access the area via a bypass.

The bridge is approximately two miles from the Moleson Creek Stelling - a heavily trafficked area where a ferry plies the Guyana/Surinam route.

Parkinson further disclosed that rehabilitation of the other bridge in Moleson Creek will commence in 2015.

Over the past 12 months, the Ministry through its bridges’ programme has built several major bridges including one at Ogle, Eastern Highway (Sophia) and Hampton Court. 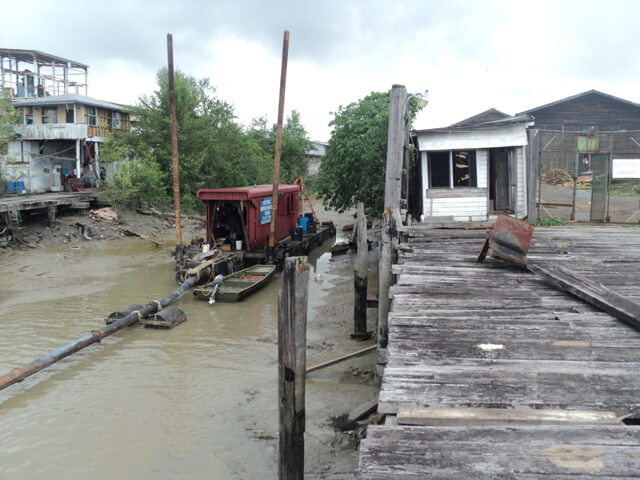 KINGSTON - The dredging of the Sussex Street outfall, which when completed would alleviate flooding in communities including Albouystown, is expected to be finished by the end of May.

“The outfall is heavily silted and impedes the discharge of surface water that accumulates in the canal during the rainy season,” Maitland Stewart, a Senior Engineer attached to the Works Services Group (WSG) explained.

Meanwhile, the Princess Street, Ruimveldt and Kingston outfalls have been identified to be desilted over the next few months.

“These are major outfalls that the Ministry of Public Works will maintain,” Stewart added. Plans are also underway to desilt major canals that lead to these outfalls.

According to Stewart, the Demerara Harbour Bridge (DHB) is facilitating the physical execution of the works, while WGS is supervising the exercise.

KINGSTON - The Ministry of Public Works wishes to provide an update for the spring tide period of March 27, 2014 to April 3, 2014 for areas that were subjected to overtopping which necessitated emergency intervention by the Sea & River Defence Department.

During this spring tide period, the highest tide was experienced on March 31, 2014 at a height of 3.22 metres; however, the Ministry notes that gusty winds coincided with the high tides along the coast causing an elevation in wave heights and consequential overtopping in some areas.

The Ministry continues to monitor all vulnerable areas and undertakes preventative maintenance and emergency repairs on critical sea and river defences where necessary.

In this regard, the Sea and River Defence Force Account Unit has mobilised to undertake emergency repairs on the river defences at Mosquito Hall, East Coast Demerara, Region No.4 and Hyde Park, East Bank Essequibo, Region No.3. At Mosquito Hall, structural repair works will be carried out to remedy cavities and structural undermining of sections of the existing wave wall which have developed during this spring tide period.

Additionally, the Ministry will be executing upgrading works to the earthen embankment and adjacent façade drains at this location. It should be noted that major reconstruction works have been scheduled for Mosquito Hall/Lancaster under the 2014 Sea Defences Capital Programme. A tenderwas publicly advertised for works at Mosquito Hall and were opened on February, 2014. The Ministry is currently awaiting award of the Contract.

At Hyde Park, a 15 foot breach has developed in the river defences due to erosion of the existing earthen embankment. This has resulted in localised flooding of the area due to water intrusion at high tides. The Sea and River Defence Force Account Unit is currently working at this location to reinstate the breached section of embankment. It should also be noted that reconstruction works have been programmed for this location under the Caribbean Development Bank funded 3rdSea Defences Project.

The Ministry wishes to reiterate that all vulnerable areas along the coast will continue to be monitored and preventative maintenance measures carried out as required. The public should take note that spring tide advisories are published with a list of vulnerable areas during all spring tide periods.

The Ministry will continue to advise the general public on critical developments with regard to the implementation of sea and river defence works in coastal and riverine communities.

KINGSTON - The Ministry of Public Works will be installing a total of six geotextile tubes along the Kingston - Kitty sea defences to form a groyne field, an initiative under the 2014 Sea Defences Programme.

This project will contribute to beach stabilisation and the retention of sediment drifting in a westerly direction along the Kingston - Kitty foreshore. The works are currently being undertaken by the Sea and River Defence, Force Account Unit within the Works Services Group (WSG).

Geotextile tubes are used internationally as a cost-effective material alternative for coastal and marine projects.

The tubes are manufactured from geosynthetic based materials which are factory sewn to achieve the desired formation. Installation of the tubes is carried out by filling with sand or suitable dredged material.

For the groynes being installed at Kingston, white sand is being utilised as the fill material.