KINGSTON - Conservation International and the Guyana Tourism Authority partnered with the Maritime Administration Department (MARAD) to provide training and certification for boat operators in the Annai-Rupununi area on July 17, 2014.

The training and certification program was conducted by MARAD at Bina Hill in the Annai area.

At the end of the training, twenty-one (21) successful participants were awarded the Certificate of Competency to operate as boat Captains under the Licensing of Ships Regulations, 2001.

The Maritime Administration Department is committed to promoting maritime safety throughout Guyana. In this instant the Department’s effort in the Annai- Rupununi area will now empower boat operators to legally ply their trade and enhance their income earning potential, particularly in the tourism sector. 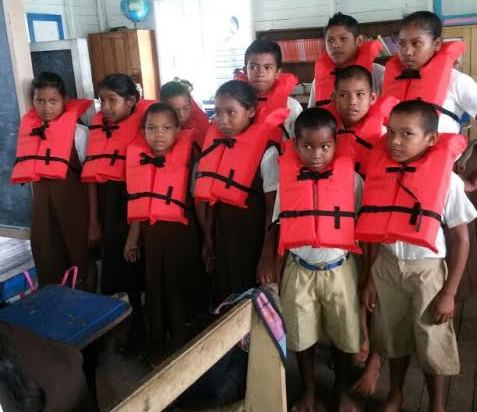 KINGSTON - A team of officials from the Maritime Administration Department (MARAD) distributed a quantity of children life jackets to schools in Mabaruma, Region One (1) North West District on July 10, 2014.

The distribution of life jackets runs parallel with the Department’s ongoing countrywide maritime safety awareness campaign. This is all part of an initiative to distribute life jackets to school children in the hinterland areas.

On receiving the life jackets for the St. Peter and Paul Primary School, teacher Sharlin Jeffrey, thanked MARAD for the gesture and emphasized that maritime safety would be considered when traversing the waterways.

Maria De Costa of the Anselm's Primary School expressed her gratitude and also said that she will ensure that her students wear their jackets at all times when in a boat.

Similar sentiments were expressed by Franciana Boyer and Brian Nazier, teachers of the St Dominique's and Sacred Heart Schools respectively, who said they heard of the countrywide distribution of life jackets and were eager for the donation to the schools in the area.

The Maritime Administration Department will continue its safety campaign throughout the country as safety on Guyana’s waterways remains MARAD's priority.

This visit was initiated by the Honourable Robeson Benn, Minister of Public Work after he would have received reports about allegedly poor condition of boats and also poor operational practices in the area. The people in riparian communities such as the Mahaicony Creek depend upon marine transportation. However, most of the boats operators are unlicensed.

Meanwhile as part of the effort of promoting safety on our waterways, a total of seventy-four (74) children life jackets were distributed to schools in the Mahaicony Creek area. They are Gordon Table Nursery and Primary School, Karamat Primary School and Moora Point Nursery School.

At the Gordon Table Nursery and Primary School, Teacher, Ms. Laurain McLennon expressed her gratitude to MARAD for the donation of twenty-five (25) children life jackets and assured the team that she would ensure the children of her school wear their jackets whenever travelling on a boat.

Head-teacher of the Karamat Primary School, Mr. Lalto Paul was very grateful for the thirty-three (33) life jackets for the children in light of concerns he expressed about unsafe practices by boat operators in the area. He also spoke about the timeliness of the donation and thanked the Department for the initiative.

Similar sentiments were also expressed by the Head-teacher of the Moora Point Nursery School, Ms Bindoo Inshan as she received sixteen (16) children life jackets for the students of her school.

The Regional Chairman in brief remarks to the boat operators, encouraged them to equip their boats with lifejackets, and then to ensure that their passengers wear them at all times while traversing the waterways. He repeated one of MARAD’s themes that “lifejackets saves lives”. Then in closing, he thanked the team from MARAD for the donation of the children life jackets.

The Maritime Administration Department will continue its safety campaign to other Regions of Guyana in keeping with its mandate of promoting maritime safety in Guyana.

KINGSTON - Efforts are underway to salvage the truck that fell off MV Kanawan on April 9 on to the Essequibo river bed.

However, salvaging operations are being hampered by unfavourable tidal conditions, but operators are tackling this problem.

The truck, GKK 9195, was at the time transporting 12 tonnes of cargo when it unfortunately slipped into the Essequibo River between the ferry and the floating ramp while disembarking at the stern draw door of MV Kanawan at Supenaam Stelling Ro Ro facility.

A total of nine small vehicles, three canter trucks and nine small wheel-base trucks and seven full size trucks were being transported from Parika to Supenaam.

It is apt to note that there was no damage to the Supenaam facility and it is in operational order.

The T&HD and MARAD are investigating the circumstances surrounding this incident.

KINGSTON - MV Lady Zai returned to Guyana on Monday April 7, 2014 with eight crew members on board.

They were all examined by the Health Authorities in Saint Lucia and given clearance to sail following the death of one of their colleagues on board the vessel.

The vessel was quarantined by the Port Health Authorities in Saint Lucia, but the quarantine was subsequently lifted on March 17, after it was sanitized in accordance with their specific guidelines.

After the vessel was given clearance to sail, it called at Vieux Fort, St Lucia; Port of Spain, Trinidad & Tobago; and Curacao where it discharged and subsequently loaded cargo for Guyana.

The Lady Zai left Guyana on March 9, 2014 for St Lucia with ten crew members. However, during the voyage one crew member; Lilkumar died and another had fallen ill and was hospitalised in St Lucia.

The Health Authorities in Saint Lucia later confirmed that the Guyanese crew member died from Bronco Pneumonia and the sick crew member was stricken by the same illness. The sick crewmember did not complete they return voyage back to Guyana with the ship. He was repatriated to Guyana from Trinidad to rest and recuperate properly with his family.

Officials from the Maritime Administration Department (MARAD) visited the Captain and crew at the John Fernandes Wharf to conclude their investigations. 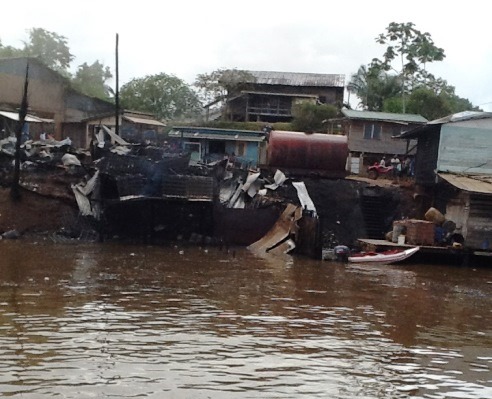 Fire on boat destroys boats and buildings at Port Kaituma

KINGSTON - A team from the Maritime Administration Department (MARAD) and the Guyana Fire Service (GFS) travelled to Port Kaituma, North-West District, Region One on April 4, 2014 to investigate a fire which originated from the vessel ELLIANA B and destroyed several vessels and buildings ashore.

At approximately 07:30 hrs on April 4, the vessel which was discharging diesel fuel into drums ashore caught afire as the pump malfunctioned and jets of the diesel sprayed on the hot surface of the pump.

A fire consequently ignited and engulfed the vessel.

The lone crew member who was on board attempted to fight the fire by himself, but the heat intensified causing him to jump overboard. He swam ashore and raced to the hospital for medical treatment.

Simultaneously, the fire spread to other boats and buildings nearby, destroying four buildings used as dwelling houses, shops and storages. Also five boats are believed to have been destroyed.

The blaze extended on top of the river as well, as the diesel leaked overboard onto some combustible garbage in the water.

Residents from the community formed themselves in bucket brigades and were successful in stopping the fire from spreading to other buildings ashore.

There were no fatalities and the only reported casualty was the crew member who sustained first degree burns to his back and feet. He is currently being treated at Port Kaituma Hospital.

Meanwhile, Minister of Public Works Robeson Benn reiterated the need for persons to clear the waterfront area. He went on to state that the congestion is hampering much needed road works in the area.

Hon. Benn also noted that his Ministry is pursuing several measures to deal with maritime safety in the area and the issue handling illegally imported fuel in the area.

KINGSTON - A jet-propelled passenger vessel was involved in an accident in the Essequibo River in the vicinity of Welga as it was proceeding from Parika to Bartica at approximately 05:00 hours Saturday May 3, 2014.

There were fourteen persons on board. Although several were injured there were no fatalities as a result of the accident.

Officers from the Maritime Administration Department (MARAD) are in the area assessing the situation and are conducting the initial phase of the investigation.

KINGSON - The Maritime Administration Department (MARAD) remembered those persons who recently perished on the waterways by distributing nine sets of hampers to relatives of the deceased at MARAD's Head Office on January 10, 2014.

In addition, relatives of Captain Dale Duggin, 28yrs of Paripi Upper Demerara River, who recently died in November in a boat collision, also received a hamper on behalf of their family.

Four other persons were also beneficiaries of hampers from MARAD, they are, Swarswati Charran, wife of Zahir Baksh, 34yrs old, Carlton Amsterdam, father of Keanu Amsterdam, 17yrs old, Penelope Grimes, wife of Ulric Grimes, 39yrs old, all of whom died in January 2013 on the Mazaruni River in a boat collision. Peggy Williams also received a hamper on behalf of the family of Donna Rampersaud, who recently perished in a boat accident in November 2013 on the Essequibo River.

Seventeen persons died in 2013 as a result of boat accidents.

MARAD in its continued effort to curb accidents on the waterways, has embarked on a countrywide safety campaign involving life jackets distribution, and safety messages promotion in all regions of Guyana.

KINGSTON - The Guyana registered General Cargo Vessel ‘STOLLIE 1”, which was bound for Port Kaituma, North West District, sank off the Guyana Coast between the entrance of the Pomeroon and Waini Rivers on January 18, 2014.

The vessel departed Georgetown at 06:00 hours on Friday January 17 with a consignment of general cargo. There were four crew members on board.

According to the initial investigation, the M.V. STOLLIE 1 is believed to have sunk after its engines failed and it became disabled. Some cargo apparently shifted, thus causing the vessel to list heavily before it began to take in water until it sank.

The captain and crew safely evacuated the sinking vessel with their lifesaving equipment and they were subsequently rescued by a passing vessel some 12 hours later.

This incident is now being investigated by the Maritime Administration Department.

KINGSTON - The Maritime Administration Department (MARAD) has given approval for the small passenger boats operating between Georgetown and Vreed-En-Hoop to operate at nights until 20:00hrs, with effect from December 1, 2013.

All of the vessels that are operating during this period were re-inspected and are equipped with all the required navigation lights and the necessary equipment to operate at nights. Lights have also been installed at both termini to further enhance the safety and security of persons using this service.

The Department is continuously monitoring this situation with the view of a thorough evaluation early in the New Year.

The Guyana Police Service is playing an integral part in this exercise to assist in the maintenance of law and order.