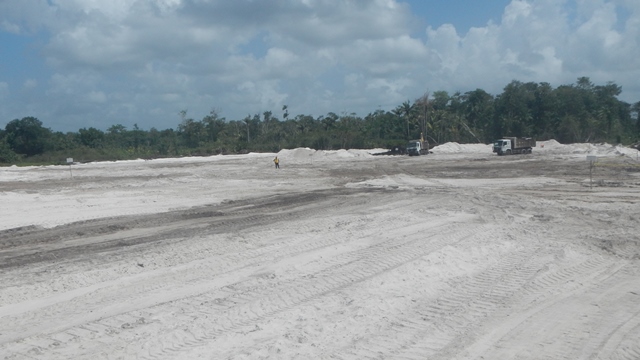 “The next step is for Engineers to conduct geotechnical testing, which means samples of soil will be taken to ensure it is of high quality…and I anticipate this will be completed in another few weeks,” Singh noted.

Meanwhile, excavation of additional areas for the runway extension is ongoing, and according to Singh, “it is expected to pick up speed from June 2014.”

China Harbour Engineering Company is carrying out the works.

The runway extension is being constructed to category Code 4E to accommodate the BOEING 747-400 aircraft. The runway will be extended from 7,500 feet to 10,800 feet.

The US$150M project also includes the construction of a new terminal building, which is slated to begin in the fourth quarter of the year.

Whilst the airport expansion is moving forward, Government through the Ministry of Public Works has begun courting airlines.

Over the past five months, officials have engaged in conversations/negotiations with top airline executives to ply the Georgetown route. So far, the feedback is encouraging.

“Our selling point is that we are modernizing our airport to accommodate 777 and 747 aircraft, coupled with our aggressive tourism campaign has piqued the interest of international airline executives,” Ramesh Ghir, CJIA’s Chief Executive Officer (CEO) stated.

According to him, airline investors are optimistic of aviation growth in the country and pointed to the new airlines now operating from CJIA. The fourth quarter of 2013 has seen the re-emergence of Travel Span and the introduction of Fly Jamaica and CONVIASA – a Venezuelan based airline. COPA, a Panamanian airline will commence its operation in July 2014.